The Conference of Western Wayne announces that new Text-to-911 service is now available to its communities as part of its “Call if you can, text if you can’t” public safety message. 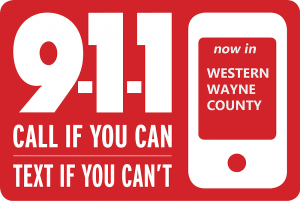 PLYMOUTH – Westland Mayor Bill Wild, chair of the Conference of Western Wayne (CWW), and CWW law enforcement officials announced today the availability of text-to-911 emergency services as part of CWW’s “Call if you can, text if you can’t” public safety program.

Under state law, the CWW coordinates one of four 911 Service Districts within Wayne County.  With advancements in mobile phone technology leading to a large number of residents using SMS text messaging for various communications, the elected leaders and law enforcement officials of the 18 CWW communities began working in 2015 to test and implement new technology empowering citizens positioned in CWW communities, including Detroit-Wayne County Metropolitan Airport, to send SMS text messages to local 911 emergency centers when seeking help or to report emergencies when voice calling is not an option.

“The Canton Public Safety Department is eager to be a part of this new E/911 initiative, providing an alternate method of contact for citizens to request police, fire and emergency medical services.  Our staff has been trained and is ready to start accepting requests for service via text message,” said Todd L. Mutchler, Director of Canton Public Safety.

Text-to-911 is an important new service that offers citizens who are deaf, hard of hearing, or have a speech disability, a new way to contact emergency services.  Other examples of a citizen needing text-to-911 service could include domestic violence, kidnapping and other situations where victims need a way to call for help without tipping off a criminal during the commission of a crime.

In focusing on the regional aspect of this project, Mayor Wild said, “’Our 18 communities did something you don’t hear much about these days—we worked together to benefit everyone.  We work tirelessly to grow Western Wayne County and provide our citizens with the best services possible.  And as a region we chose to combine our efforts to bring this new access to 911 to our 700,000 residents, 100,000 businesses and all those who travel through and work in our communities every day. Public safety is the first priority of local government and the CWW prides itself on protecting our citizens.”

How does it work?

Anyone who is within the borders of the 18 CWW communities can use the service, as long as they have a texting plan with one of the four major carriers: AT&T, Sprint, T-Mobile or Verizon.  The service is activated by sending a SMS text on a mobile phone to the number “911”.  That text message will be routed to the nearest CWW 911 dispatch center for action.

At the current time, the rest of Wayne County does not have text-to-911 service, although some neighboring counties such as Oakland and Macomb have fully implemented text-to-911.  If the texter is in an area that does not support text-to-911, they will receive a “bounce-back” message informing them 911 is not available via text.

While the new technology is an exciting advancement in public safety services provided by CWW communities, officials said that citizens should “Call if you can, text if you can’t” when contacting 911.

CWW officials emphasized that text-to-911 is a compliment to calling 911, not a replacement, because voice calls to 911 are still the most efficient way to communicate with public safety officials in an emergency situation.

CWW leaders began researching the best practices for implementing text-to-911 technology after exchanging policy ideas with law enforcement and 911 officials in Oakland County who had implemented their text-to-911 program in 2015.  Throughout 2015 and 2016, 911 officials in the 18 CWW communities then worked closely with each other and major cell phone carriers such as AT&T, Sprint, T-Mobile and Verizon to implement and test its own system.

Western Wayne County now joins both Oakland and Macomb counties in implementing text-to-911.  The technology is under various states of development in other counties across Michigan.   More information can be found on the State of Michigan 911 Committee website at www.michigan.gov/snc.

The National Organization on Disability (2007) reports that there are an estimated 54 million individuals with a disability in the United States, with more than 37 million individuals who are deaf, hard of hearing, or have a speech disability and could benefit from text-to-911.   Additionally, there may be circumstances, such as domestic violence or in-progress incidents in which a voice call is not practical or is dangerous to make, further making text-to-911 useful.

The Conference of Western Wayne (CWW) is a group of 18 Western Wayne County communities that coordinates 9-1-1 services for its 700,000 residents and a 360 square mile region. CWW also represents its 700,000 residents by meeting monthly to discuss issues such as legislation, transportation, public safety, substance abuse prevention, community and economic development, employment and the environmental health of the region.